This is the last known photo of the 1st Corn Palace built in 1892 on the NE corner of Fourth and Main Street.  Notice the harp sitting on the stage along with a couple of chairs and assorted furnishings.  The Corn Belt Committee in 1904 to help Mitchell in their bid for the State Capital went all out with Navajo motif decorations. This is the stage on which John Philip Sousa and his band performed for $7,000 a day for six days in 1904.  The new Palace was built on the NE corner of Fifth and Main in only 55 days and was ready for the Corn Palace Exposition of 1905. The Beckwith house sits directly behind in the background with the dome of the Court House showing.

This ad came from the Daily Republic dated October 15, 1912,  featuring a coal burning heating stove that boasts, “Any stove can burn up coal, but mighty few send the heat into the room.  Most of them send it up the chimney. … The reason why is the Garland Three Flues.”
M.H. Gosche owned a hardware store located at 101 Main Street in Mitchell, SD.  The site had previously been occupied by L.W. Adams who opened the first hardware store in Mitchell.

From the Carnegie Archives.
Published in the March 3rd, 2021 Mitchell Republic.

The East Side School pictured was built in 1884, near the middle of the block between Fifth and Sixth Avenues, where the present day Cathedral Squares Apartments are located. The school’s name was later changed to Lincoln School. It was decided in 1907 to build a new High School, so Lincoln School was moved to the northwest corner of the block and some rooms were used to house some of the Senior High programs. On August 11, 1933 it was voted that the Lincoln School be abandoned for the coming year and the teachers transferred to other schools. In 1934 the Lincoln building was remodeled into offices for the superintendent and clerk. The administration was on the north side of the first floor and High School students would enter the south entrance to enter where the band practiced on the south side of the first floor. Shorthand and typing classes were held on the second floor and journalism was in the basement. The old Lincoln School building was razed in 1963 and the Administrative Offices were moved to the old Post Office building at Fourth Avenue and Lawler Street then later to the Mitchell Middle School. The offices are currently at the Second Chance Alternative School building located at 821 N. Capital Street.

In the village of Firesteel, Dakota Territory a group of young men became friends.  Upon the promise of the railroad coming to a site two miles to the north, Firesteel businesses and residents began moving to this new site called Mitchell in October 1879. A group of young men would meet around the drug store’s old stove to conserve the small amount of fuel and have companionship daily during the winter of 1879. Amidst the desolate prairie, blizzards and an uncertain future a group of sixteen young bachelors from the old stove gatherings formed a society to “the continuance of that friendship which engendered in Mitchell amid the ‘blizzards’ and hardships of the winter of 1879-1880” so says their constitution. They had a president and secretary and would hold a reunion and banquet each year upon the arrival of the first blizzard. The first reunion was held Friday, October 15, 1880.  The last reunion of this group of old friends was held on Thursday, November 18, 1915, with nine of the original sixteen members still living in attendance.  For more information on this pioneer group come to the Carnegie Resource Center and investigate this unique piece of Mitchell history. This Hoyt Cox photograph captures the club known as the “Mitchell Comrades of ’79” in their older days.

This is an article from the Mitchell Daily Republic found in our files.  We are looking for a date concerning this incident.  Please contact The Mitchell Area Historical Society housed in the Carnegie Resource Center at 119 West 3rd Avenue with any information that we could add to our files.  Phone 605-996-3209.  Thanks in advance for any information to help us.

From the Carnegie Resource Center.
Published in the March 17th, 2021 Mitchell Republic. 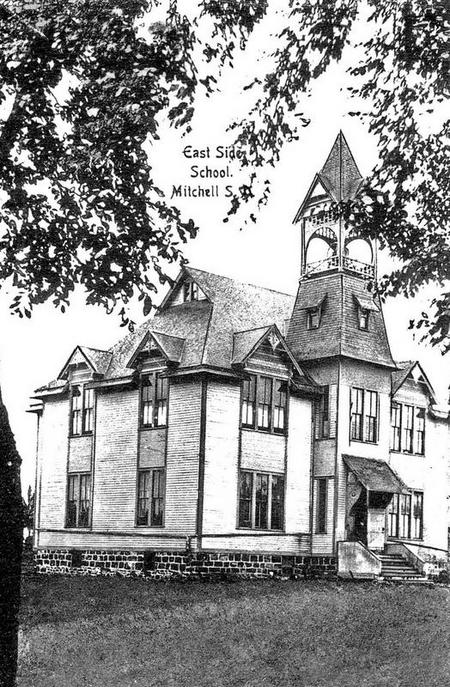 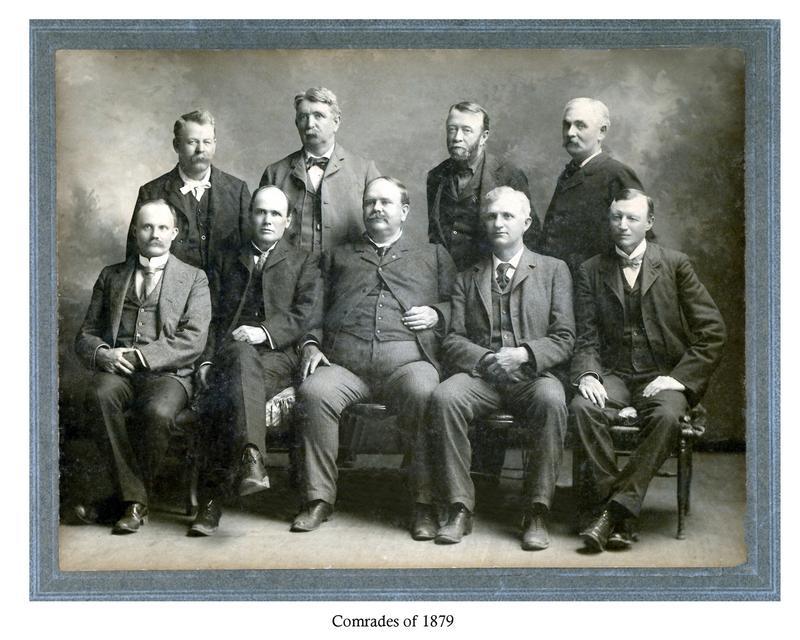 Gutzon Borglum along with his son, Lincoln, supervised the construction of the memorial from 1927 to 1941.  According to the website, “The four presidents were chosen to represent the nation’s birth, growth, development and preservation.  The memorial park cover 1, 278 acres and the actual mountain has an elevation of 5, 725 feet above sea level.”  Normally, Mt. Rushmore attracts nearly three million visitors a year.  Covid 19 restriction are posted on the Mt. Rushmore website.

Mitchell High School at 410 East 5th – 1909
Built in 1894 Central High School located on Sanborn Street between Second and Third streets was too small. In February 1908 Mitchell voted to build a new high school at 410 E 5th Ave.  A grade school, Lincoln School, sat in the spot for the new High School. It was moved to the northwest corner of the block. The new Senior High School held classes the second semester of the year 1909-10, and in 1913-14 the third floor was finished for classrooms. The Senior High School at East 5th eventually  became too crowded, and a new High School was built in 1962 at 900 North Capital. This modern structure included the first cafeteria in the Mitchell School System and an auditorium seating about 600.  Additions were made to the school on Capital in 1982, because of over-crowding. The old High School on East 5th Street was sold to the Holy Family Catholic Church in 1963 for $67,000 and served Notre Dame High School until 1970.  Cathedral Square Apartments now occupy the location.

This Stair photo from August 25, 1915, captures the moment when Postmaster Thomas J. Ball drove the first spike on the northern end of the street railway system being built by O.E. Cassem and his associates.  Following the driving of the spike by Mr. Ball, O.E. Cassem, Jr. drove the second spike on the other end of the tie. This trolley car system transported passengers between the Milwaukee Railroad and the Omaha Railroad Depots along Rowley Street. The trolley car system only lasted around 2 ½ years.  The Omaha Railroad station sat at 801 N. Main and the Milwaukee at S. Main and Railroad St.
From the Carnegie Archives.

South Dakota Traveling Men’s Association Convention (an organization for traveling salesmen) is the event happening on the West side of Second and Main - Mitchell, SD.
This is the L.O. Gale building - built in 1881 and extended to the alley in 1891. A clothing store that sat on the ground floor of the L.O. Gale building (201 N. Main) either belonged to Indra Leopold or William Metcalf. The sign on the side of the building is for Hart, Schaffner and Marx, a men’s clothing line founded in 1887. Ownership of the store changed hands in 1907 from Leopold to Metcalf.
When Gale built the building, he operated a drug store and pharmacy on the north side of the store with the south side devoted to books, toys, silverware and musical instruments. Down the center of the store he had jewelry and more expensive items for sale. Gale also had a area for jewelry repair.
Incomplete History of the Gale building ground floor:
Snow’s Ice Cream 1953-1955, Army & Navy Store 1957
Schiff’s Shoe Store 1960-1967, Worthing’s Western Wear 1967-1998
Janitor’s Express 2005-2008 (Fire), Outdoor garden for Dr. Lucky’s Bar & Grill 2017-2020

Form the Archives of the Carnegie Resource Center.
Published in the February 10th, 2021 Mitchell Republic.

In honor of the 100th Anniversary of the construction of our current Corn Palace in 1921.

Pictured is the newly constructed 1921 Corn Palace during Corn Palace Festival Week, with the free street show on the south side of the building.  The Flying Lavans lead the free street shows provided for the Corn Palace week-long Festival.  The Lavans, considered one of the top two aerial acts in the country at the time, was made up of five men and one woman and used a 52 by 40 foot net rigging.  Karl King and his band were the main attraction for the festival in 1921.  Notice the fire escape ladder on the side of the building.

A Hersey Photo from the Carnegie Archives.

The first telephone operator in Mitchell, SD  was Millie Mayo, sister of Fred B. Elce who started the Mitchell Telephone Company in 1898  with 75 customers.  The original company was  sold to Dakota Central Telephone Company in 1904 with 424 town and 11 rural customers. Growth forced the company to relocate in 1911 to 115 East Third.  The front of this building still has the  “TELEPHONE” nameplate over the door.  In 1929 the Tri-State Company of St. Paul, MN purchased the company and  both companies  became subsidiaries of Northwestern that ultimately merged with Northwestern Bell in 1942. 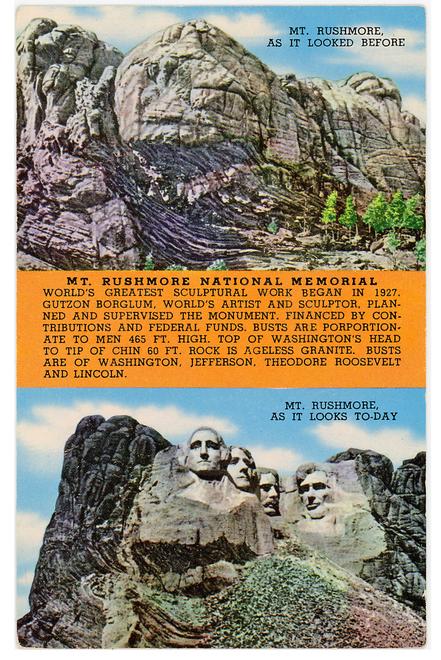 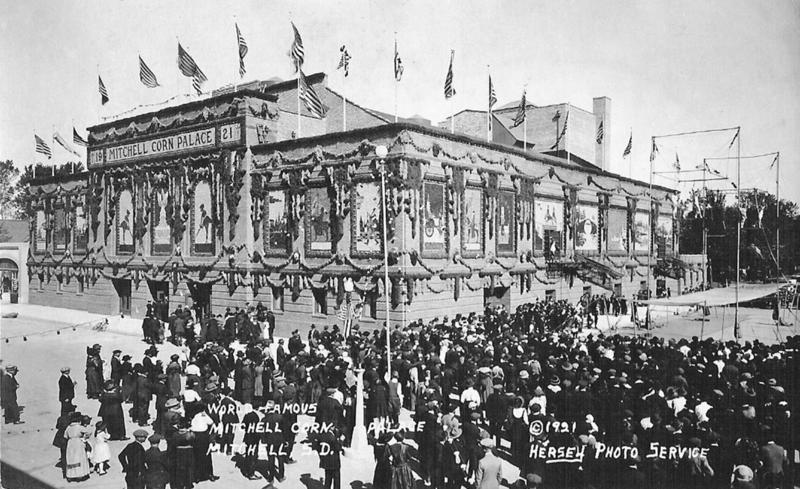 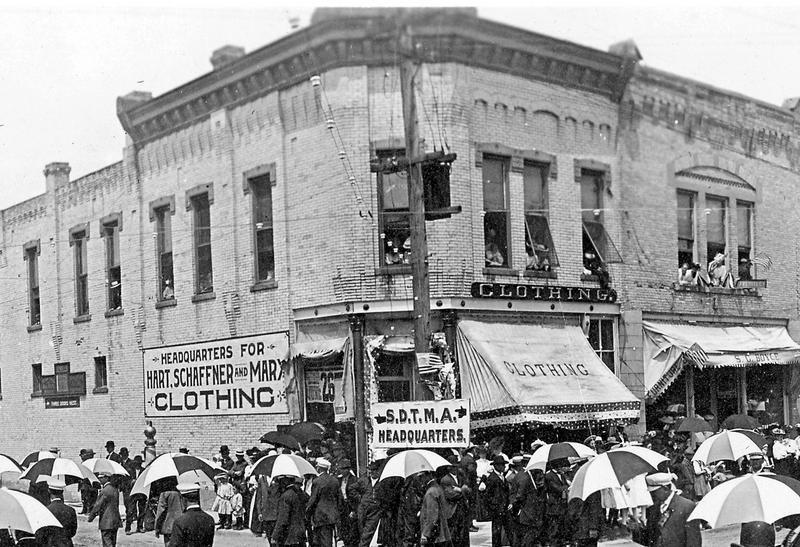 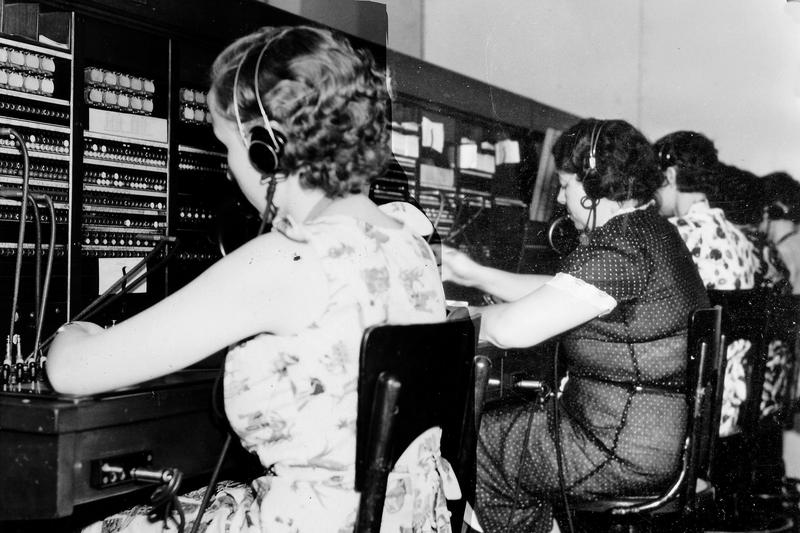 Built in 1894 the South Side School in Mitchell, SD sat on Havens Street.  Students in this part of town had attended school in a Lutheran Church for awhile until this building was established. After 1894 several improvements were made to the building: 1906 a furnace was installed, and rooms were completed for the 5th and 6th graders who had previously attended Central; 1908 toilet rooms and drinking fountains; 1909 7th and 8th graders were added; 1912 paper towels and liquid soap along with ONE pencil sharpener.  By 1919 the building became overcrowded and needed many repairs. The idea of a new building was brought up and it was decided to build two new elementary schools – one on North Main and one on the south side.  This school was first called South Side and then Eugene Field by 1907.  According to an Evening News article of January 6, 1922, this building was salvaged and moved to 620 South Sanborn where it was remodeled and turned into four apartments.  It served hundreds of Mitchell students in its 25 years.  The school building opened in 1922 on the same spot operated until 1994 when a new school was built south of the DWU campus and was then named L.B. Williams after a former mayor.

Published in the May 1st, 2021 Mitchell Republic 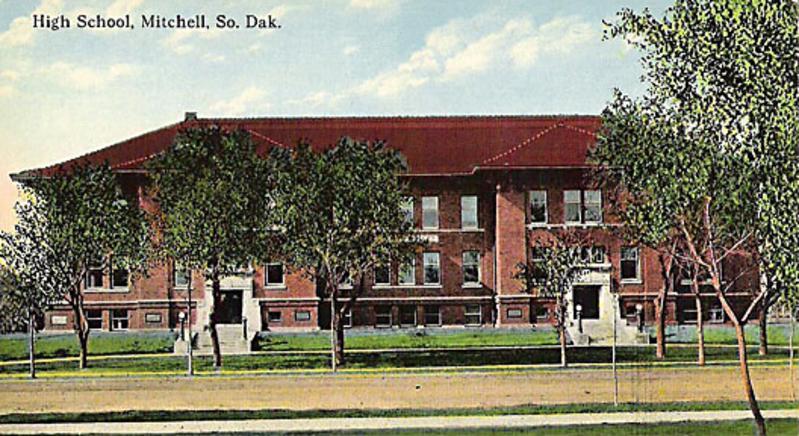 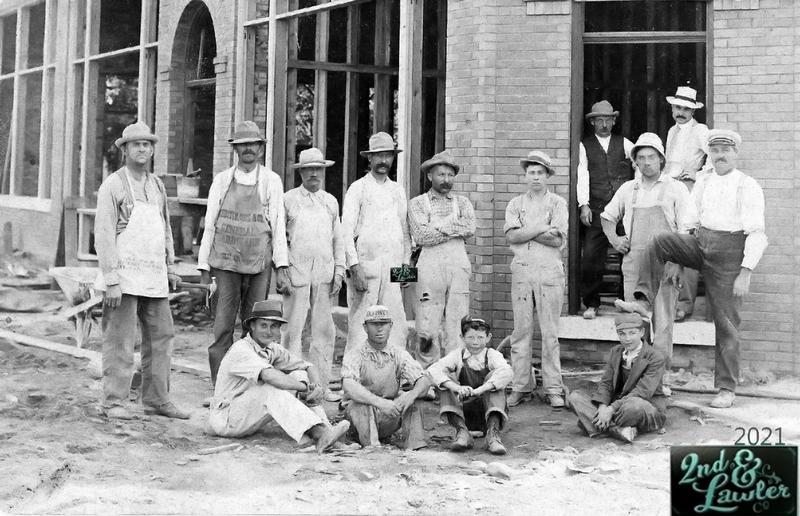 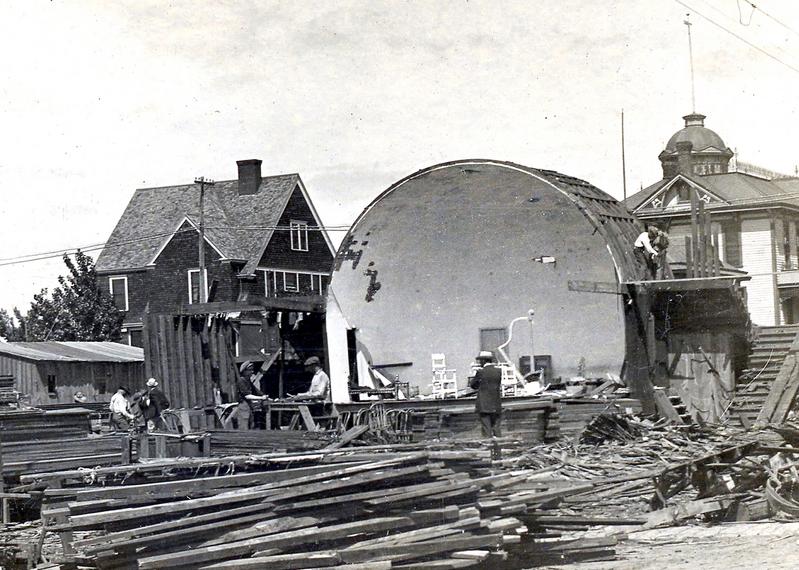 The Mitchell Steam Laundry on East Second and Lawler was in the process of construction in 1910.  J.K. Fox, owner, is standing in the doorway with the white hat.  A harness company occupied the top floor.  Currently the 2nd and Lawler Co. featuring candy, toys, old fashioned soda, flavored popcorn and some menu items etc. occupies the building.
From the Carnegie Archives. 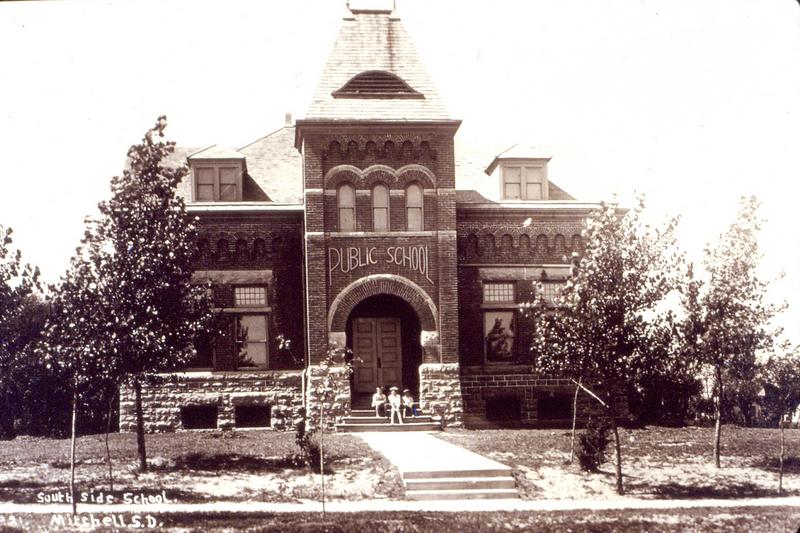 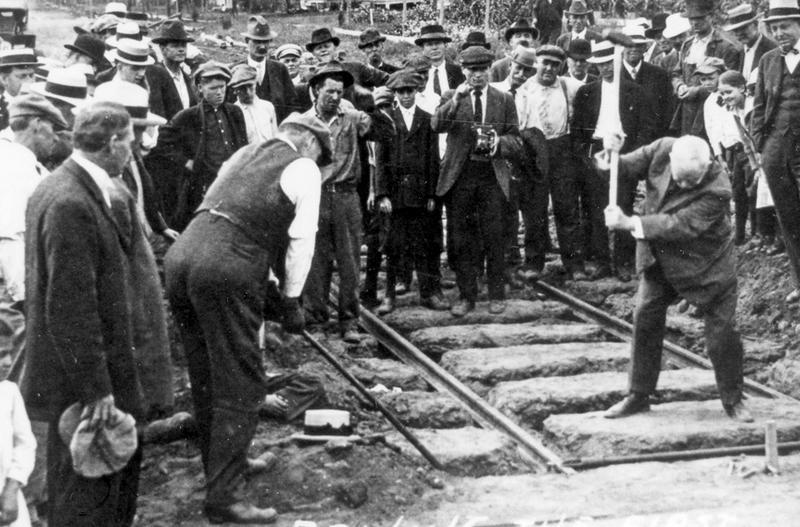 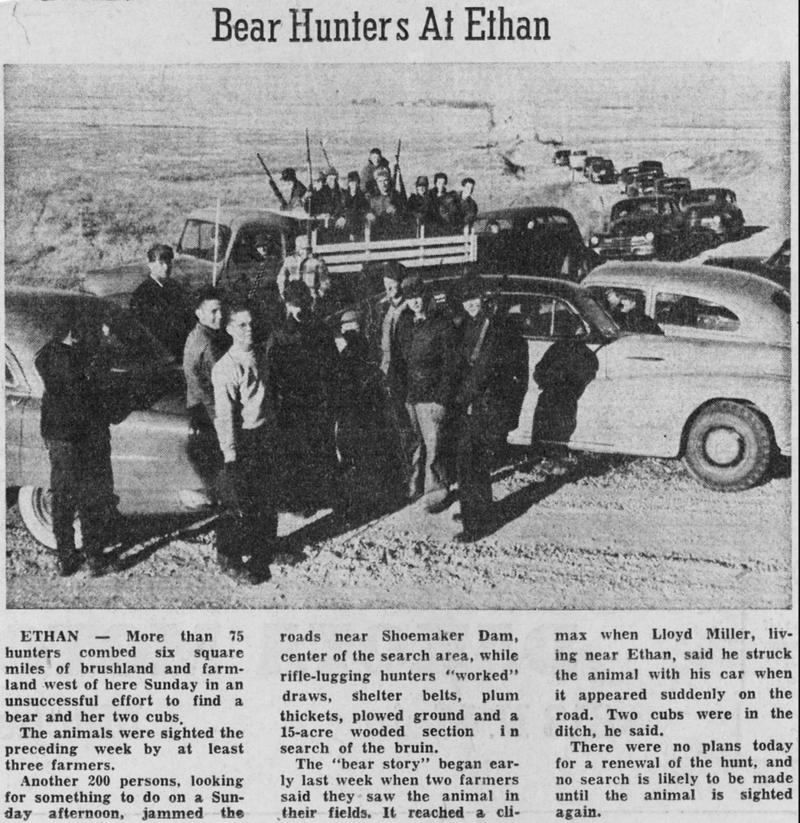